Featured are a small group of artists,  Alejandro Campins, Andriy Halashyn, Cisco Merel, Joaquin Rodriguez Del Paso & the W’s, who are revolutionizing the grand tradition of painting through forward leaps in style, content and technique.

_
Opening September 5th with a reception from 6 – 9 pm.
Exhibition continues through October 31, 2013

Born in the Ukrainian, artist Andriy Halashyn moved to Costa Rica to find a wealth of inspiration for his rising career as a painter. Halashyn plays on his bi-cultural perspective in scenes set from both world wars mixed with the seemingly playful introduction of figures from contemporary life. A denim cutoff and bikini clad couple saunter past a crew of WWII pilots in RETURN and the faces of well-know fashion icons are surroundings with all the trapping in SYNTHESIS OF ADVERTISING. If his juxtaposing of generations is not eye-catching enough, his technique is what sets Halashyn’s work apart. In Halashyn’s world, color is a tool of wit and if your leg is turning blue, it means something. 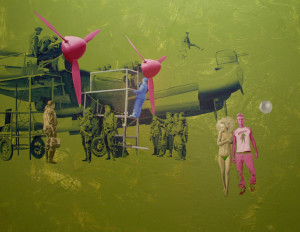 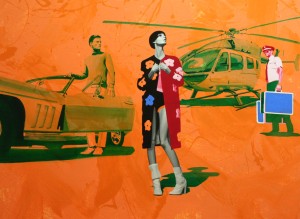 Panamanian artist Cisco Merel combines the compositional awareness of a classical painter and the graphic qualities of a street artist in order to convey a post-modern Utopia, moments of beauty and color infused into a world of chaos and concrete. Merel earned his BFA at the University of Art in Ganexa, Panama in 2004 and has recently gone on to receive scholarships to  artist residencies in Leipzig and Paris. He has been exhibited throughout Central and South America and most recently in Belgium and Germany. saltfineart is proud to be the first gallery to represent his work in the United States. 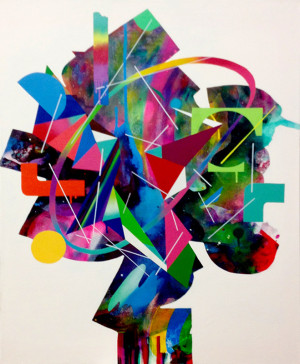 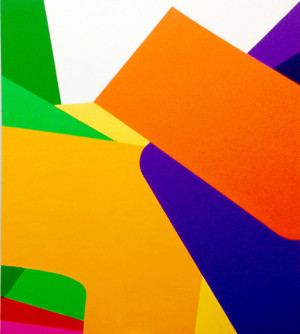 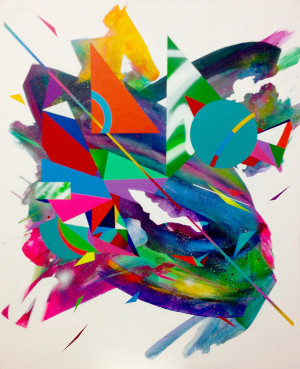 Joaquín Rodriguez del Paso’s brightly covered canvases comment upon trade, governments, national and international affairs and the human consequences they incur. His work has participated in Biennales the world over, including the prestigious Venice Biennale, the Sao Paolo and Havana, among others. His work has also been exhibited at major museums such as the MOCA Los Angeles, the Museo del Barrio New York, the Taipei Fine Arts Museum, the Museum of Contemporary History in Holland. He has also shown at galleries in Denmark, Holland, Germany and Spain. 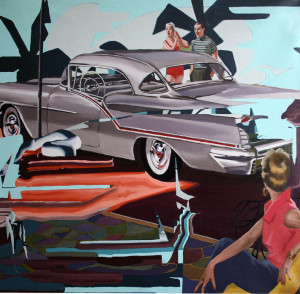 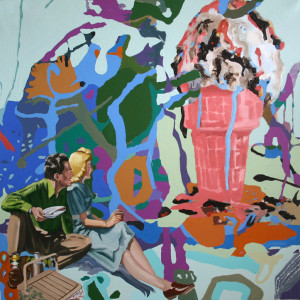 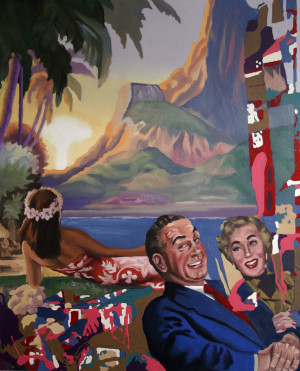 W represents two artists, Paz Ulloa and Vinicio Jimenez, working together as a team. Passing their creations between each artist, both add a small part that contributes to whole therefore continuously reinventing the meaning of the piece until it is deemed finished. Process gives way to a constructed comic book-anime universe, fluid and rapidly moving, seen through a youthful gaze. Despite their youth, their talents have been duly noted. W has had several solo shows at prestigious galleries in Costa Rica, as well as having exhibited abroad in Panama, Switzerland, and New York. 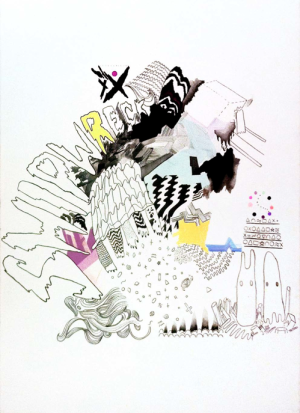 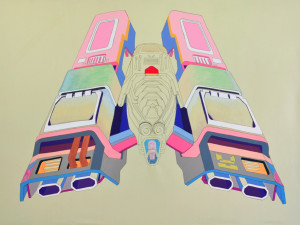 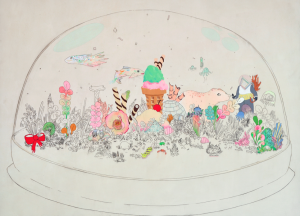 Born in Manzanillo and rigorously trained at the Superior Arts Institute in Havana, Campins is a young sensation in the contemporary Cuban art scene.   As a painter, he is known primarily for his ambitious mixing of materials—- oil, watercolor, pencil—- painted or applied to canvas or parchment paper and his expressionist, if wry, capturing of the surreality that is daily life in Cuba.   Already, he has exhibited widely in Cuba and Spain, where his work has been reviewed as singular and spectacular.  He has also participated in collective exhibitions in Germany, Portugal, Egypt, Ecuador, Colombia and the United States. 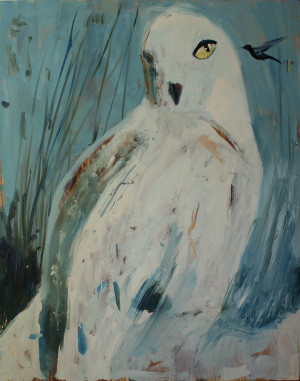 NO ME OLVIDES
mixed media on canvas60 x 48 inches 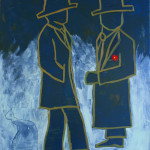