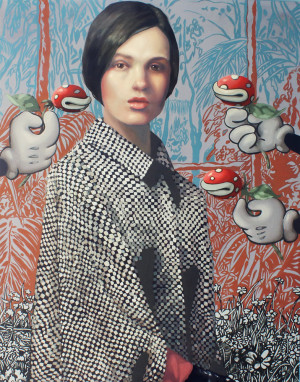 Luis Cornejo is a master of Pop— it’s commentary, challenges, and traditions. Cornejo, a contemporary Pop Surrealist, utilizes the vocabulary of Pop sensibility established in the 50s and 60s to different affect to create work that is both intimate and impersonal. Very often when we think of “Pop,” brightly colored, glossy, and intense works come to mind, like that of Warhol, Rauschenberg, or Lichtenstein. There is an element of derivation inherent in pop as well as the idea of mass-production, and many works are produced on an assembly line or some other means alienated from the artist’s hand. While Cornejo embraces the “assembly line” in terms of subject matter, his works are all original, masterfully rendered drawings or paintings with the cold gaze of Warhol’s Liz Taylor and the mark-making of a Classicist.

Cornejo uses high fashion models as his main subject matter, their exquisitely posed and contrived expressions made to seem absurd in their interactions with animated figures. He employs this tension between Pop and Classical to varying degrees throughout his different series. In his drawings, one might overlook almost entirely the Super Mario Piranha Plants hidden in a wreath of flowers atop a young girls head amidst the delicately rendered cross- contour lines, whereas in another drawing, the pronounced head of a cartoon snake in place of a designer scarf makes the entire scene feel like an animation still. His paintings read as a bright Summer fashion spread with Bugs Bunny ears in place of hair extensions, or Popeye’s pipe where a long, slender cigarette should be.

While the models in his paintings are goofed on for being as cartoonish in character as the actual cartoons they are sharing their environment with, Cornejo’s work succeeds where every great Pop commentary does— by challenging the imagery we may have grown accustomed to.

Cornejo has exhibited individually and collectively throughout the Americas and Europe. HIs career has skyrocketed in recent years, representing El Salvador at the Central American Biennial in Panama in 2012, a top award from the Museum of Art in El Salvador, MARTE in 2011, and a DAAD Scholarship for the School of Fine Arts in Dresden, Germany in 2009. 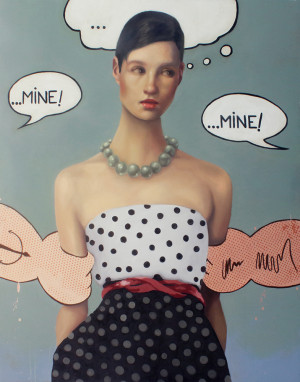 MINE
acrylic and oil on canvas
59 x 47 inches 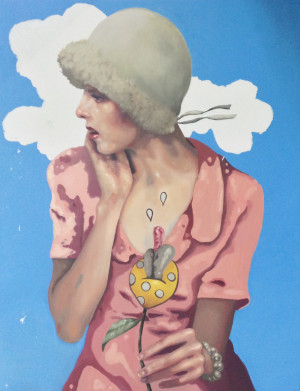 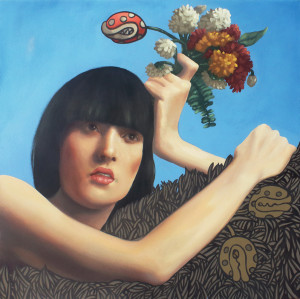 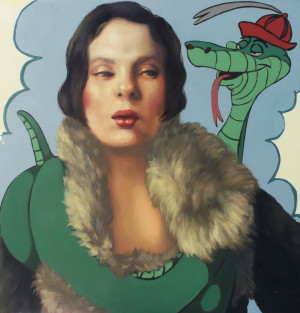